Podcast with Jules from the Dagga Couple

A while ago we went to the Jazzfarm and had a chat with Jules from the Dagga Couple. For those of you who do not know the Dagga Couple and their story here is a quick quote from their website: 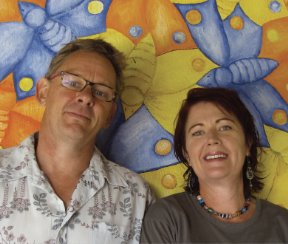 In August 2010, we had a very heavy handed visit from the South African Police Service (SAPS) who, acting on a tip off, raided our property in search of a ‘drug lab’. What they found was a quiet middle aged couple in their pyjamas and a quantity of Cannabis Sativa (aka Dagga). We were arrested after a five hour ordeal in our kitchen, jailed, and because we had more than 105g of the substance, were charged with dealing in Dagga. We were subsequently granted bail and released.

Currently the Dagga Couple (Jules and Myrtle) is fighting to legalize weed/ marijuana/ boom/ dagga/ cannabis in South Africa. In the past couple of months they have gained support from weed smokers all across South Africa. Their Facebook fan page has over 10 000 likes at the moment. Smokers from all across the nation is coming out to show their support  and help the Dagga Couple in their legal battle against a terribly outdated law.

Jules and Myrtle are not just fighting to get marijuana legalized in South Africa, they are also educating the nation about the weed. Propaganda has been used for years to stigmatize  weed to the point that people do not even know the truth about the plant and the positive things that can come from the plant.

We sat down and had a chat with Jules about weed. Give the podcast a listen. For more info on how to help Jules and Myrtle fight the huge battle please have a look at their website and go and like their Facebook page.