Corey Taylor: the art (and curse) of songwriting 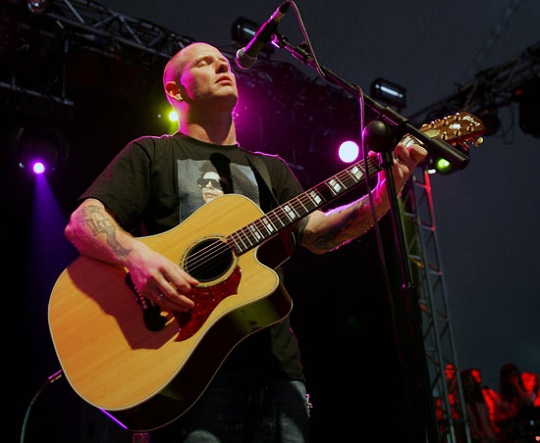 I jump out of bed – mind racing, ideas buzzing, shit popping out of a secret chamber in my freaky brain – with a bastard melody so stuck in my head that I can’t sleep. Careful not to wake my wife or son, I bundle downstairs to find my notebook and acoustic guitar. After 25 years of doing this weird ritual I know the only thing that will allow me entrance into REM state and rest is to sit down and ‘write this fucking song before it drives me crazy’.

There’s nothing wrong with this electric collage. But for me, it allows me to use my imagination to fill in the blanks with any instrument at my disposal, and when you can hear the individual strings ringing, it can trigger ideas you didn’t think you had: orchestration, second and third guitar parts, keys or synth, walking basslines, vocal harmonies… the possibilities are endless, really. All from six metal strings tied tight to a wonderfully creative collection of wooden parts.

The other thing brilliant about writing on an acoustic is that it means now, you can play that song any time you want, whether you are with a band or by yourself. A song is only as strong as its foundation, and when it comes so naturally in any setting those are the songs that will hopefully outlive you, maybe even outlive the next generation of You.

It’s also a wonderfully gratifying gift to be able to write your own lyrics and provide the melody that marries music to meaning. I’m very lucky to be able to accomplish this, but it took time, patience and a LOT of practice to be able to do so. The cool thing is because of the work, now I can get to the point I’m trying to make pretty quickly with very little rewrites.

People ask me all the time how I’ve been able to get a handle on my emotions, seeing as it’s been a problem my whole life. How do I deal with the rage, the depressions and the manic diversions that drive me crazy? It’s because I can say how I’m feeling and let it all off the chains with nearly 100 per cent pay-off or reciprocity. I can get to the core of what’s really going on, so I don’t hold on too long. It was hard, but so worth it.

And I have to be honest, if I wasn’t able to unload these self-destructive feelings, I wouldn’t be the man I am today, for better or worse. I encourage kids and adults alike to find that thing that gives you a way to let it go, and I tell them the more you work at it the easier and better it feels. I can control it because I have the key that opens the door. I can write a song that can speak to anyone about anything, and yet for me the meaning is always there in stone.

I love the fact that people can relate to what I’m saying even if it’s not for the same subject I was writing about. That is the power of real music and real expression. If that shit’s real, you can let go of some real shit.

When I’m finished, I put the notebook and guitar where I found them, grab a glass of water and head for bed. I do my best not to wake up the family again, even as I catch myself humming the song I JUST wrote. I know I won’t be able to really sing it until the next day, but then again there’s a really good chance that tomorrow night I’ll have to turn around and do it all over again.

What a wonderful bastard of a curse. Hope you like the song when it’s done!