Odyssey: The Koppi that was

This piece was written by Lorimer Wilmot.

So my reason for being at this year’s Oppikoppi was entirely selfish (and yes, maybe writing this article seems a bit boastful, but hey, fuck that.) So my band played at this year’s festival and it was my first time back since 2008’s Wild Card. Hot damn, how things have changed. Much like a fine wine, Oppikoppi has matured and only got better. The stages were amazing, the lighting and the sound spectacular and the quality of the acts was unfuckingbelievable.

We arrived on Wednesday night as we were opening the Bruilhof stage on Thursday afternoon at 1pm and didn’t want to have any hassles getting in or the chance that anything could go wrong and miss our set, yes, we’re that serious. So we got in at 11pm, set up camp and had a braai, as one does at 12:30am. We awoke, nervous and shaky, made some scrambled eggs and then went to register and get our shit checked in.

By the time 12pm came and time for our sound check, I was (oddly) feeling a whole lot better. The whole deal now felt real and it became the old “just another gig” feeling. Only at this gig, there were loads of people, among them new folks who’d never seen us before and a professional stage with crew and the works. Also, it lacked power. Yip, the bloody power wasn’t working and the guys were frantically trying to get it going. 12:30 came and went and still nothing. 12:45 departed and you guessed it, nothing. The Big Chief came along and then said “well if you can’t play now, we’ll sort it out and you can get it on tomorrow”. No. Fuck that. We’d been rehearsing for 6 solid weeks and this wasn’t how it was going to pan out. I mean, we appreciated the sentiment, but damn, waiting a whole other day was not what we signed up for. 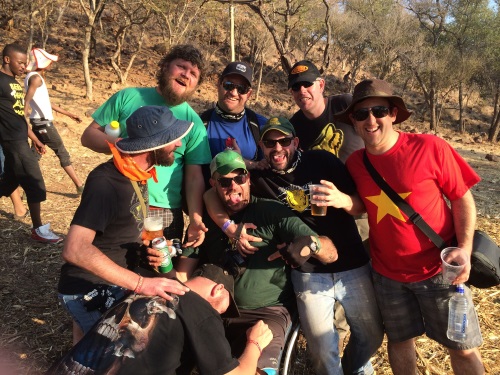 13:05 and the sound engineer and stage manager shout “Power’s on, let’s do this!” – We were just sitting around so we figured, cool, sound check and then play. Umm, no. We got on fired up the amps, checked levels and would you believe it, we were on. Straight bloody away. The next 42 minutes are still a blur, I mean there are pics and (possibly) some videos, but that’s it. I know we played songs (and probably fucked up a little) but damn, I don’t really remember it at all. I do however remember seeing people jamming and jumping around and a lot of smiling faces. I guess it’s always a rush to play, but at this level, it felt absolutely bloody amazing. And that was that. 6 weeks of intensive rehearsals, fights and godknows what else and there, done. Thanks for coming.

So, with that out of the way, many doors opened up for the rest of the weekend’s jol. With the show done and dusted we decided to head up to the top stage and watch the ever magical David Baudains work his magic on his acoustic guitars. It’s a little retarded, but we only watched David Baudains and then Squeal that night. On that note, Squeal were amazing. I felt like it was back at One Big Bang in 1997 and was my old 19 year self. Hot damn, for a bunch of ballies, they sure can rock out and I hope they keep doing some shows. The crowd sure didn’t mind, that’s for sure.

So once they were done we left and headed back to the camp site. We chilled there and drank some beers and watnogal. Next thing, this dude stumbles into our spot (clearly under the influence of something stronger than just booze) and gets caught up in the thorns. “Hlabi-hlabi” he utters. We four whities just look at each other and then Dave (our drummer) busts a nut with laughter. Hlabi-hlabi is a colloquial zulu term for never ending thorns, or as Dave put it, Thorns on thorns on thorns on thorns – you see where it goes. The dude was a long way from his area and we sent him on his way with a shot of whisky and many blessings to keep him safe from them Hlabis, though I fear that he never found his friends and only ended up caught up in a soetdoring for the rest of the weekend.

Friday arrived unannounced, but we were ready. More eggs and the last bits of “fresh” wors for breakfast and we were ready to do ab-so-lute-ly nothing. Yip, we just chilled, we chilled the morning away and eventually made a move to the Wesley Dome for the legend that is Urban Creep. Again, I’d last seen them in 1997 and dammit, those okes made it look like there weren’t 17 years in between. Damn, Chris Letcher is indeed a talented oke. His lyrics are fantastic and the music, well, the music was amazing – easy to see why he’s such a sought after film scorer.

A friend of ours had arrived at around 5pm bearing gifts of eggs and bacon for our next two days breakfasts – best thing ever. I highly recommend taking a Skottel braai with you to your next ‘koppi. Just being able to eat some eggs in the morning really makes a moer of a difference. Seriously, try it, it’ll change your life. So off we trekked into the bowels of Mordor to track her down, after about an hour’s walk and loads of phone calls later, we found her and got the goods, trekked back and realized that our intentions of catching Mr Cat and the Jackal had been thwarted.

Once we’d got back to the camp site we only left again for Taxi Violence – A definite highlight, of note! – and the Springbok Nude Girls – yeeeah, not so good – and then hit the Klein Bar for The Fake Leather Blues Band. Goddam, what a band. We were not disappointed at all. Their front man is an absolute showman and the band, well the band is only made up of some of the best talent not only in PTA but surely in the whole damn South Africa. If you’ve never seen them, be sure not to miss them when you see their next show advertised. Seriously.

We then got stuck. The DJ (well I use that term loosely) was the guy from Bittereinder and some of his mates who really just stood around and pressed play on their laptop – when they weren’t dropping the damn thing off the stage – but damn, they chose some of the best tunes. We eventually left and headed back to the camp site at about 5:30am, after many attempts to leave. Seriously, one good tune after the next – I think I did my 19 year old self very proud.

Saturday continued post arriving back at the camp with a bit of a nap and then another hearty breakfast – there seems to be a theme here – after the chowdown we headed to the stage areas to recharge the empty bank cards and get some BOS ice tea and voddies. Breakfast juice of champs. Whilst at the BOS tent The Liminals from Cape Town started to jam. Damn, I’m glad we caught them. Seriously good. Right up there with the best of them, these lighties sure can play. If you ever see a poster advertising their show, don’t stay at home. Klap it to the jol and party your pants off. Seriously, your pants in fact, will party themselves off on hearing their tunes. 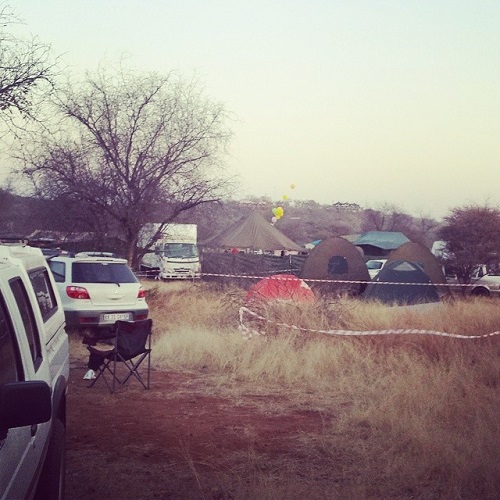 Bra Hugh Masekela was on later in the afternoon and that was one show we were not prepared to miss out on and it. He did not disappoint. The show was chockablock, we got our space in the front and stayed there. Bra Hugh came on and the crowd went mad. He rocked into “Stimela” and then his own version of “Sarie Marais” – the crowd again, went mental. Hell yeah. That was amazing. From there we went off to see Cat Power – She came out with her little Danelectro guitar and had a keyboard onstage and that was it. And she owned the crowd, they ate out of her hand and it was good. We stuck around for the nutters that are The Inspector Cluzo from France. They were mad, their music was good and they rocked us out. And then, then it was time, time for the bands that most of us had been waiting for. Rival Sons, Editors and Wolfmother. Fuck yeah.

I’d not heard Rival Sons before but now, I’m a fan. Damn, those dudes can play – the slide guitar, the keys, the drums, the goddam bass and the guitar! Wow. In case you didn’t get it at first I. Am. A. now. Fan. Editors, well, I’m not the biggest fan and unfortunately they didn’t convert me. Look, don’t get me wrong, I like depro indie vibes as much as the next guy, but ja, they make tunes for girls. They’re a bunch of good looking poms with lots of guitar effects and deep voices. But they didn’t get my juices flowing.

Wolfmother however, well, how can I put it? They melted my face. Not just my face, Stix’s face, Deon’s face, Frances’ face, Rob’s face and all 3 Dave’s faces. They melted, got mixed together, flung around the koppi and stuck back on. At least that’s how it felt. Not much has ever come close, they were tight – about as tight as bladdy Bruce Springsteen in February this year. Seriously, tight, tight, tight.

As if things couldn’t get any better, we headed up to the Klein bar again and there we stayed. Until 6 fucking am on the Sunday. We had to finish the cash we had loaded on our cards, we had to. So beers, sambuccas and vodkas were bought. We danced to DJ Bob and the Unhappy hour DJs and I talked Danelectros with Cat Power. Darkness Dave then snogged her and that, as they say was that. We chatted to the okes from Shadowclub etc, etc and Stix disappeared. So did our cash and with that another Oppikoppi.

What a jol, what a party, what a festival. Here’s to Oppikoppi 2015 and more Hlabi-hlabis than you can throw a cat at. See you at the top bar.