If you didn’t know, you know now: gevaaalik.com has gone bilingual. We now cater for Afrikaans and English. We have friends from all the different walks of life and I was getting tired of the sound of my own fucking voice, so I can just imagine how you guys must feel at this stage of the race. So we are spicing this up with some new additions to the team.

One of these friends is Lorimer Wilmot. No, he isn’t really a lemur, but seeing as his little story references plenty of use of illegal substances, he has decided to go with that name. Let it be know that gevaaalik.com does not endorse the use of any illegal substances, except dagga and mushrooms, allegedly. See you at Oppikoppi Odyssey.

So this is what happened in April 2003. Some laaities and tjerries from Kempton got a bug in their beetle and decided to make the trek to Northam and check out the April “Chilled” if not tomorrow, then the next day Oppikoppi fees.

For many of the bende it was the first time making the mission, some of us were veterans already, I’d been to 4, my bok at the time had been to 3, as had 3 of the 11 bende-members. For the rest of the ouens en meisies, they were about to be popped.

We rocked up on the Thursday night, klapped the tents up and of course, got the fire going and the booze flowing. By 2 the following morning we had made friends and got getrek.

The interesting thing was that most of the folks we met were Afrikaans, we were all ‘n klomp Souties. This was deemed odd by a lot of revellers, as I found out when I woke up the following morning, hearing Collin (or as he’s affectionately known “Savage”) chat with passers by. The conversation went something like this: 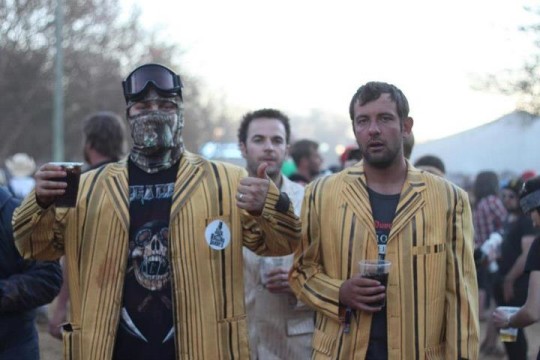 Ok. So what happened the previous night, please help me remember…

And this was the start of the weekend.

We carried on gooing die taal – it’s something us Rooinekke do when we feel a bit out numbered, you know, to try and fit in and avoid a moering – and gooing the dop.

The friday night rocked, need I say more than “Tidal Waves” as an explanation. Partied hard and passed out, jy weet mos hoe dit gaan. Things had a tinge of normality to them and then saturday snuck up and gave us all the PK from hell…

It all started with Potjiekos. Yes, Potjiekos. Potjiekos with zol. Die Potjiekos from hell. Okay that’s taking it a bit far, it was very nice. What else are you to do but eat when the munchies nail you and eat we did. We eventually got the “let’s go check a band bug”, missioned to the top stage and found the bar. Mr Jagermeister then made his appearance felt… Die kak het gespat.

Looking through the mist of time I recall when we met the most unfortunate soul and ultimately the funniest oke I’ve ever met at a ‘Koppi. The poor bugger, I forget his name, but he didn’t speak English so add a name for yourself, chatted for us while walking back to the tent. Then it happened. A bakkie passed us and he decided he’d had enough of this walking crap. He chased it and it stopped (to pick up some bokkies) so he thought he could climb on now. One problem though, the driver hadn’t seen him try to get on the back and pulled away, causing our man to fall to the floor and was only able to use his chin as a brake. Yip, he cut that chin good and proper. Luckily there was (as always) the first aid tent and they patched him up. That was Saturday night and we thought we’d never see the ou again.

Sunday morning, babalaas and all we woke up and got cracking with breakfast, you know, the usual, a bong and some coffee. The bong was something constructed using a Wheel spanner from the VW Kamper and a coke bottle… Yip, you get the picture, wheel spanner down the bottles neck and a little clutch poked in the side of the plastic bottle. Well then it happened, ou maat from the night before found us. He’d messed his bandage up good and proper, had dust in his cut and somehow he knew we had a first aid kit, telepathy I think. So Bushy patched him up, put the bandage around his head and redressed the wound, when suddenly it was spotted. He saw the bong, yellow water and all and motioned for me to pass it, so I obliged. Next thing we knew, he’d downed half of the bong, no not smoked it but drank the water… He drank the frikking water. All I recall was the chorus of a Dave Matthews song as the ladies all chimed “Don’t drink the… water”.

Well meeting that ou was undoubtedly one of the highlights of that oppikoppi and of course Clint throwing the cleaning ladies kids into the swimming pool, but alas, I only heard about that one. He did make up for it by passing out after way too much whiskey and cheering for King Edward VII High School.

We trekked back to Kempton with fond memories and thorns in our feet and readied ourselves for the following weekend, when half of the gang would trek to Splashy fen. But that’s a whole other story.