The US has 45 legal marijuana states

Back in 1996 California was the first US state to legalize medical marijuana. Over the past 22 years, legal marijuana states have increased dramatically leaving only 5 states that still have marijuana illegal. It has become clear that it is only a matter of time before marijuana is federally legal in the United States of America. In Canada you can legally purchase cannabis online from sites like Cheap Weed. While South Africa is stuck in a state of limbo concerning the legalization of marijuana here, the US has created a growing industry. This growing industry has created jobs and boosted the overall economy on a massive scale. 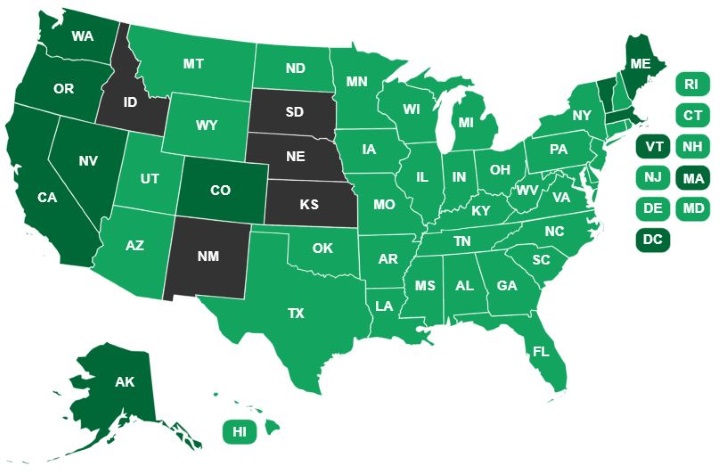 Legalization is based on scientific research

Marijuana has been widely studied over the last 22 years and what these studies have shown is a clear contradiction to most of the anti-marijuana propaganda that was once commonplace in the US. Many studies have shown that there are various medical benefits to the use of marijuana. Many medical conditions can be treated with the cannabinoids found in the marijuana plant. These cannabis-based medications offer a great alternative to traditional pharmaceuticals. Especially patients that experienced negative side effects from the use of traditional pharmaceuticals have turned to marijuana to relieve the symptoms connected to their specific medical condition.

If marijuana is legalized on a federal level the United States could see additional funds of $105.6 billion generated from the sales of medical and recreational marijuana. This according to a report by cannabis analytic firm New Frontier. Fully legalizing marijuana would also create 654,000 jobs, with the number of jobs growing to over 1 million by 2025. States, where marijuana has already been legalized, will attest to the positive economic impact legalization has had. The economic growth is not only because of the strict sales tax but also because of industries that are created around legal marijuana. Everything from clothing, paraphernalia production, weed vaporizers, marketing, and research and development businesses have popped up to cater to the ever-growing market of marijuana consumers.

How long until full legalization?

If you asked the same question 23 years ago, the answer would have been much more complicated than it is now. That being said, there is still no way to really tell exactly how long it will be until all states are legal marijuana states. What we can say for sure is that we are much closer than we were just 22 years ago.