Since the release of the Battlefield V reveal trailer a lot of gamers have been throwing their proverbial toys out of their literal cots. Get it? Because some gamers behave like little children who sleep in cots? Yes, the Battlefield V controversy has been raging on the internet.

The reveal trailer for Battlefield V features a female character kicking ass, and even smashing an enemy’s head in with a cricket bat. This particularly small part of the Battlefield V reveal trailer has caused many a gamer to be offended and a new study has shown that it’s probably due to a lack of testosterone and increased levels of estrogen.

“Basically we ran tests on every gamer who posted an angry tweet containing the #notmybattlefield hashtag. What we found is a severe and radical decrease in testosterone and an increase in estrogen in gamers who have voiced their dislike for Battlefield V containing female characters,” explained Dr. Wütend Wissenschaftler, head of research at Deutsche University.

The condition is known as #NotMyBattlefield-syndrome

According to Dr. Wissenschaftler, various factors over many years have played a role in these biological changes being experienced by offended gamers around the world. Lack of physical activity, severe lack of exposure to sunlight and fresh air as well as maintaining virgin status for years past the healthy age of 30 are all factors that have caused the rise of estrogen in offended gamers. Dr. Wissenschaftler says the diet of offended gamers has also contributed to the loss of the male hormone testosterone and the increase of estrogen: “Most of these offended gamers don’t are socially awkward and their fear of having to interact with people in the real life is at times border-line a phobia. In most cases, this crippling fear is caused by low IQ. This combination of fear and low IQ causes the offended gamers to mostly eat junk food that they can order without having to interact with another human being. Fast foods are overloaded with hormones that then get introduced to their bodies through a steady diet of junk food. They also favor foods that can be stored for extended periods of time and thus purchased in bulk, like Hot Pockets or frozen pies that are stuffed with salt. Basically, they have been eating themselves into a state of constant whining, complaining and saltiness because they are the natural weakest links in our societies.” 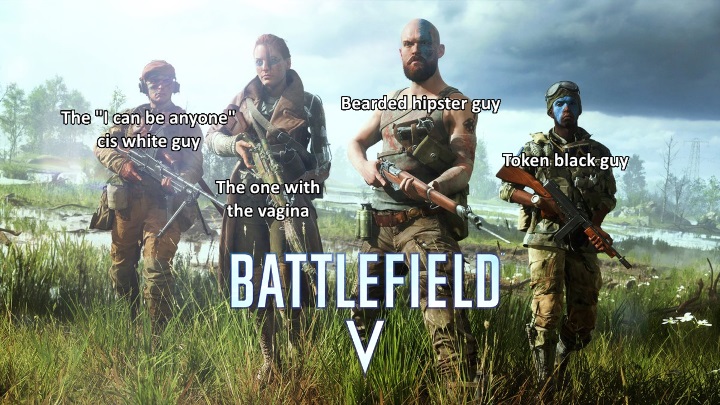 The entertainment industry has been struggling with the chains of PC culture holding back creativity and creative freedom for a couple of years now. Terrible mistakes like Wonderwoman and the all-female Ghostbusters movie have been made while trying to appease PC culture. Battlefield V is just the latest victim created by the scourge of the victim mentality. Along with the female character in the new Battlefield game, there is also a bearded character to appease hipster gamers, a token black character and the “I could be anyone”-guy to cover all the cis-white bases.

“It has nothing to do with my hormone levels, you useless satirical gaming journalist-cuck! You know what my hormones can do really well? Fuck your mom! [sic]” replied Traurig Spieler in a Discord chat message when I asked him what he thought about Dr. Wissenschaftler’s findings.

Is there really a Battlefield V controversy?

A word of sympathy for the folks at EA and DICE, especially in Community. Garbage like this #NotMyBattlefield hashtag do nothing but make it a lot harder for devs to act on real, actionable, valuable community feedback that will improve the games

“After I fucked your mother you can explain to me how it’s ok for EA and DICE to make a WWII game that is historically inaccurate. If a male soldier gets shot, he can regenerate his health in a few seconds and keep popping headshots and dealing pawnage. If a female soldier gets shot, she is dead. Nevermind the fact that women didn’t even exist in the time of WWII. Also, I can have sex with all the women I want to, I just choose not to have sex with anyone other than my hand.” said another message that Spieler sent during the same chat.

Dr. Wissenschaftler was relieved to find that there was a really easy cure for the offended gamer’s condition: “None of them are going to like the treatment, but we have found a 100% cure rate when treatment is applied to a patient only once. When the offended gamer posts their stupid opinions online there are never any real-life consequences to their online actions. We introduced consequences by sending a big old Brock Lesnar-looking man to their house to slap them after they posted their idiotic opinion online. When met with real-life consequences for their online actions they stopped behaving like retarded 12-year-olds.”

Luckily most of us gamers just want to play games, so that we can escape the real world that is infested with retards like Traurig Spieler for a couple of hours. For the rest with their dangerously high testosterone levels, an old-fashioned slap against the side of the head will do wonders.