“I always talk about privilege and how the privileged should help those that are not privileged. I’m a young, uneducated black man that has made a success of myself by riling up other uneducated people and making them promises that I can never keep. I’m now privileged and I’m going to show white South Africans how land reform should be done. I’m giving my Sandton mansion to one of my ten domestic workers.” 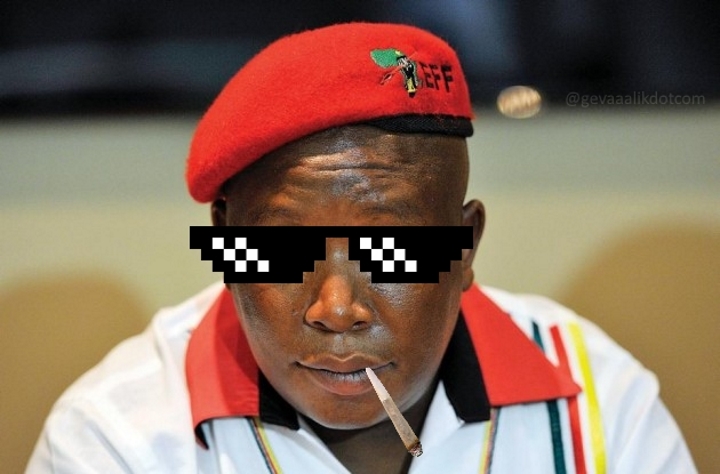 “That’s politics my friend. Kallie Kriel goes overseas or on the radio and says something stupid, then I say something more stupid. Steve Hofmeyr tweets like he has had no education, I have a brilliant speech like I had today. That is why you are here, interviewing me, you have to fuel the fires. Reporting doesn’t sell on social media. Reporting doesn’t get the clicks. Reporting doesn’t pay your salary as a journalist. Sensationalism, that’s where we are all making our money. Fat cats.” explained Malema.

Some of the statements that have come from both ends of the political and cultural scale has been borderline racist, wrong and in some cases clearly in denial of fact and reality, but as a journalist it is my job to blow these statements and quotes out of proportion so that the article can get clicks for more than 24 hours. Journalistic integrity dictates that we do this, because if we don’t how else will Kallie Kriel know what Julius Malema has said or tweeted?

The South African constitution is to be reviewed to address expropriation of land without compensation. The South African constitution is now being placed under a public microscope and huge pressure, creating doubt in the heart of the South African people. The pressure is more from the people than it is from the politicians trying to make themselves richer, but the politicians are aware that the media won’t be able to help themselves. Endless stories have been written and are being written spreading more doubt and creating more grey areas with smart clickbait titles. More journalists are employed because of their skills in writing clickbait titles than any other skill a recent study has shown.

“Have you thought about the title you are going to give this piece of journalism?” Malema asked, making inverted commas in the air with his hands. “I bet you have. You know just as well as I do that people don’t read news articles anymore. People read titles and headlines of articles, blog posts, satire and fake news and they are too stupid to know what they are looking at. The people I pander to, the majority of them can’t read. But those who can read are being fed just as much bullshit as I can spew to those who can’t read.” he continues.

Zimbabwe has proven that what Malema is preaching is not actionable or sustainable in reality. Small groups of hateful people get pushed into the cultural psyche of South African, while the vast majority of us are cool and just want to live a decent and respected life. Social media makes us depressed and things spiral from there. The very outbursts being caused by the overload of bad information we consume daily on social media eventually spills onto social media.

“I’m giving my mansion in Sandton to one of the maids. I can easily buy another one. I have another home already. I have cars too. It sends a message doing this. I talk a lot publically about a revolution, but I’m not fighting in any revolution. I like my fat little legs too much.” Malema laughs.

“If the revolution happens, if there is war, I’m leaving. I have enough stolen money hidden away to get out. My maid with her new Sandton mansion, she won’t be able to leave the country. She might have a mansion now, she has property, but she still has nothing.”