Donald Glover makes real art with “This is America” 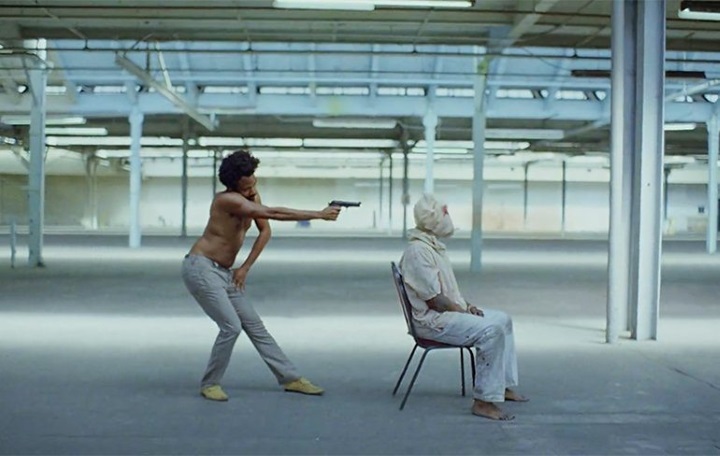 It’s been a while since American hip-hop or R&B has really been art. Donald Glover released the song and video for “This is America” this past Saturday and for the first time in a long time American black culture is represented on a deeper level than stacks of cash, gold chains, and shiny grills. But before I continue down this path, let’s just get something out of the way:

I’m not black. Hell, I’m not even American. I’m white African and as such my perspective will be vastly different from the perspective of a black guy the same age as me living in America. That said, any art is open to criticism from anyone. That is the beauty of art: It carries different meanings for everyone it reaches. Saying shit like the dummy in this tweet above does nothing to improve the current situation in America. Shutting down discussion and preventing people from voicing their opinion is a massive problem, not only in America but also the rest of the world. If anything Doland Glover wanted his art to start a discussion around real issues we as humans are facing, instead of starting discussions about fame and riches like Drake did with his last big video. As the lyrics in Childish Gambino’s “This is America” goes:

Right off the bat, I had to ask the question: “Is Donald Glover criticising modern era “rappers” like Drake for their representation of what is seen as success in the age of Instagram photo’s of lavish lifestyles, big mansions, expensive cars and all the other things that have become cliches in rap music videos and Instagram feeds?”

I can't remember the last time I watched a music video all the way to the end, let alone one five times in a row. Incredible work! #ThisIsAmerica

The video for “This is America” can be dissected a 1000 different ways, but that is what real art does, isn’t it? Also, when was the last time you watched a music video on YouTube more than once? But when you do repeat watch this video you will notice many small things that are supposed to make you think, supposed to start a discussion. The “Jim Crow minstrel pose” Glover strikes before shooting a man in the back of the head, execution style. The pants Glover is wearing that bears a striking similarity to Confederate army pants. The children performing popular dances with Glover to distract you from the chaos ensuing in the background. Glover’s yellow shoes. The way guns are carefully handled and handed over while the bodies of the victims are either ignored or just dragged off in the background.

Clearly, there is something to be said and a discussion to be had about firearms and mass shootings in America. A choir picks up the raw happy vocals on screen as Glover pops out behind a door doing a sideways moonwalk before catching an AK-47 and gunning down the whole choir. Not only a tribute to the lives lost in the Charleston shooting but also a reminder of how quickly we forget about something that only happened back in 2015 because we are bombarded with so much information in the age of the internet. Or are we forgetting these horrible shootings because we actually don’t care?

This is America
Don’t catch you slippin’ up
Look at how I’m livin’ now
Police be trippin’ now
Yeah, this is America
Guns in my area
I got the strap
I gotta carry ’em

Gun violence is obviously a big theme in the video for “This is America”. Every level of guns and gun ownership in the USA needs discussion. It’s far too easy for any American to acquire a firearm, legally or illegally. The saturation of firearms has led to more people feeling unsafe, more people getting themselves a gun and by trying to protect themselves they become part of the problem. It’s hard for gun-related crimes to occur if there are no guns, it’s hard to protect yourself against gun-related crimes if you don’t have a gun. It’s a social, economic and cultural problem that is framed well with the lyrics “Guns in my area, I got the strap, I gotta carry ’em”. Especially considering the gun-related crimes that happen in impoverished communities and under police violence.

Personally, I think the video gives it’s the greatest commentary on how celebrity, pop-culture and the victim mentality is distracting all of us from the issues that really need our attention: Education, poverty and equal opportunity. Granted, I’m not a black American but I am part of a minority in my own right. And just like the black minority in America has a problem being represented in the media as a constant victim, the white Afrikaner South African has a problem where there are many trying to make it seem like I am a victim. “White privilege” is a term the South African government actually paid to have peddled to the masses as propaganda, and this has, in turn, caused many white people to cry victim unnecessarily. But it’s a topic that cannot be breached because any discussion relating to it immediately flares into calls of racism and prejudice.

Although “This is America” is quite clearly directed at America, it speaks to problems we face globally as borders become more and more obsolete as the internet and information spreads. Even though we have the internet on our phones, right in our pockets, is it actually distracting us from the real issues we as humans face? Isn’t it ironic that a piece of art that showcases real problems has spread like wildfire on something that seems to be part of the problem? I’m looking at you YouTube.

Real art makes you think. Real art starts discussions. Real art is dissected and looked at under a microscope. Real art makes some people uncomfortable while it brings other people joy. Doland Glover produced real art with Childish Gambino – This is America. I’ve watched it multiple times and just like when I repeatedly watched Fight Club, each time I notice something new. With each view, I get something else to think about. With 31 million views at the time of publishing, I’m happy to say that it’s making a lot of other people think too. Let’s just hope that message behind the video, whatever it may be to you, doesn’t simply fade away like most internet memes do.

Donald Glover is an actor, comedian, musician, producer, writer, and director, but most importantly he is an artist. In 2018 creating a video and publishing it on YouTube, or creating a meme is an art form that reaches millions but often doesn’t get the recognition it deserves. The praise Donald Glover deserves for “This is America” is almost as multiphased as the video he created.