Why People Love to Hate Nickelback

Nickelback began their “musical career,” (I’m already developing a mild twitch), in the mid-late 90′s. Their first internationally recognized album “Silver Side Up” was released (from the cage it should never have been allowed to have left) in 2001. We all remember the first single off of that album – “How You Remind Me” – A song which we all squealed, standing in front of the mirror, while remembering that little bitch who gave your mate the “I love you” sucker instead of you on Valentine’s Day. Alright, so I’ll admit, I kind of liked that one – when I was 13. 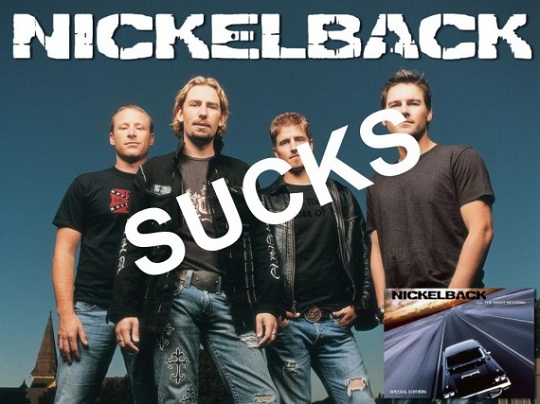 In the past few years, Nickelback have taken a whole lot of hassle from people around the globe, dubbing them ‘the worst band in the world’ amongst other, more expressive labels. The band falls under the category of ‘Flaccid Rock’ (as Gareth Wilson declares) alongside bands such as Creed (let’s not even go there) and Lifehouse. What this means, beautiful people, is that they are so painfully generic and ‘kommin’ that they have no choice BUT to suck. There are bands, such as AC/DC, who can make the 3-powerchord-thang work and then, well, we have Nickelfuck.

I struggle to decide what exactly it is about them that I hate the most – so much to select from! Is it because they are the second best selling international band in the US behind The Beatles? (Why America? WHYYYY?) Is it because Chad Kroeger’s voice unbuttons my jean-pant and grates my balls with its furry chin? Maybe it’s that long face shrouded with his macaroni-is-my-hair-long-or-short-huh hairstyle? Could it be the way he taps his leather boot at me in time with the kak song that him and his ‘team’ of music-murderers are forcing into my eardrums? All I know is when someone starts talking about them or a song starts playing on the radio – even if it’s “How You Remind Me” – my arms start flailing around wildly in search of some poor bastard’s face to look at me funny so that I can PK it.

Patrick Carney, The Black Keys drummer, made a damn good point: “Rock & roll is dying because people became OK with Nickelback being the biggest band in the world, so they became OK with the idea that the biggest rock band in the world is always going to be shit.” In other news, NHL hockey fans were not happy to find out that Nickelback were going to perform at the NHL awards ceremony and started a petition to replace them.

Here is the insert:

Nickelback is an awful band. Hockey is an amazing sport. I’m sure everyone here can agree that the NHL can do much better than Nickelback as a headliner at their awards ceremony. Please sign this petition if you want the NHL to pick a good band (any other band) to replace Nickelback in their playoff ads and at the NHL awards ceremony.

As the Urban Dictionary so adoringly states, if something ‘Rocks like Nickelback,’ well, it means that it farkin’ sucks.