Let’s be honest: Far Cry 5 is by far the most realistic hunting simulator of our time. I don’t care about the hunting game you played in a bar that one time, Far Cry 5 is just better. That is also why a group of vegans decided to start protesting Far Cry 5 animal cruelty, even though it’s a first-person shooter video game. 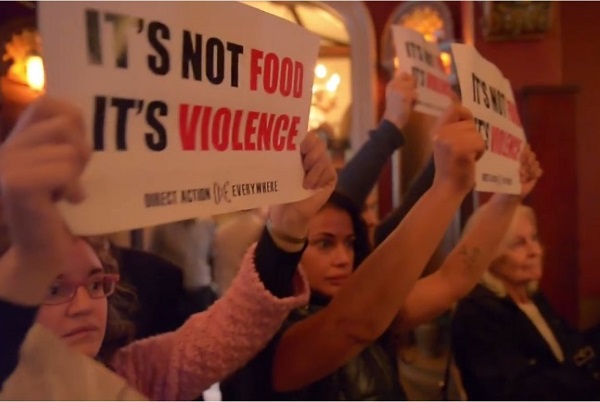 “I just don’t understand why you have to set a bull on fire before you can harvest its testicles. I mean, setting cult members on fire is A-ok, but what has a bull ever done to anyone?” said Will Potatohead, a vegan and animal activist.

Far Cry 5 is a video game where a fictional cult has taken over the fictional area called Hope County, in Montana. Hope County is smack bang in the middle of a fictional civil war between the cult and the people who do not want to be in the cult. You fight the cult by shooting, blowing up and raining chaos in general. To rain chaos on the cult, you need weapons, explosives, and other gear. To purchase your gear you need money, and one of the ways to earn money is by hunting and killing animals.

“I don’t see why they couldn’t just give you money to buy everything you need. I mean, it’s just a game after all. None of it is real. But no, you have to be cruel to defenseless animals to buy your clothes and guns.” explained Will Potatohead while getting his leather shoes polished.

Will Potatohead was adamant about his position: “I don’t care if it’s if you shoot a human in the head in a video game or real life, it’s still murder. Same goes for Far Cry 5’s animal cruelty.”

Far Cry as a series has run into the moral questions around animal cruelty in video games before. Hunting and killing animals is nothing new to the franchise and some would argue that the hunting of animals feels less forced in Far Cry 5 when compared to previous titles like Far Cry 3 and 4. In fact, you have the option to play the game without harming any in-game animals in Far Cry 5.

Is killing out of self-defense in-game acceptable?

The wild landscape of Hope County is littered with wildlife. Bears, cougars, wolverines, wolfs are just some of the animals that will attack you as you try and kill as many cult members as you can. Even cows and bulls will charge you while you are just minding your own business sniping cult members.

“Animals are scared of us. Cows and bulls are scared of us because we kill them every day for no reason. Wouldn’t you launch unprovoked attacks if you were getting killed every single day?” questioned Will Potatohead.

“It’s simple, Far Cry 5 will not be getting any of my hard earned money! I’ll let my money do the talking, and my money is saying: “NO TO FAR CRY 5 ANIMAL CRUELTY” said Will Potatohead as he got comfortable in the leather seat of his Mercedes-Bens convertible.