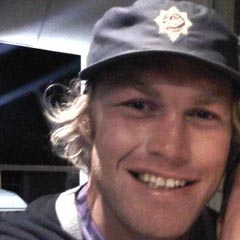 Hermanus – Six armed police officers on Saturday apparently stormed into a restaurant here during a concert by Louise Carver – because of a police cap worn by Schalk Burger.

“It was like something out of a play,” one of the restaurant patrons said.

The restaurant was packed with locals and tourists that were attending the Whale Festival.

The police confronted Springbok flank Burger, who was wearing an old cap with the emblem of the old police service.

Lieutenant Colonel André Traut told reporter Kobus Pretorius on Wednesday that it was illegal to wear anything with the police emblem unless you are a police official.

“If it happens, the circumstances will be considered, as well as what the emblem was used for. The emblem, or the item of clothing on which it is worn, will be confiscated and in serious instances a person may be arrested. Every case is treated on its merits,” he said.

A witness of the incident said that the restaurant manager spotted the trouble and spoke to the police officers.

“He offered to go to Burger himself and ask him to remove the cap and hand it over to the police.”

According to a police statement, three police officials that were on patrol handled the situation and another two joined them later on.

“The police officials kept standing at the door of the restaurant and did not go inside to speak to Burger. They used the waiters to negotiate with Burger and prevent an unpleasant situation in the restaurant.”

Burger later removed the cap and handed it over to the police.

He asked them what the problem was and they explained it to him.

“He was completely unaware that it was illegal to wear the SAP emblem and has not been prosecuted,” said the police.

However, restaurant patrons said that six police officials had stood in the middle of the restaurant.

“They were noisy, shouted and created a big scene.”

Chief manager Debra Harte said that management were disappointed with the manner in which the situation had been handled.

They are considering further steps as it was a disturbance and an embarrassment for their loyal clients.

Burger’s agent Craig Livingstone confirmed the incident and said the cap had been confiscated.

“Schalk loves Hermanus and will certainly be back for a visit.”