Biblical Christianity is under attack

Biblical Christianity is under attack, not from many fronts, but instead it is being destroyed by religious zealots like Nancy who wrote this article http://www.news24.com/MyNews24/Top-Ten-Threats-to-Christianity-20121008. I urge you to open that link and read her points and then read my responses to every single one. I responded to every single one, because every single one is retarded.

It always scares the shit out of me when I read things like this. How is it that there are so many evil Christians out there? How is it that they think it is acceptable to hate and point fingers? It’s a real pity that they are destroying their own religion from the inside and they are the ones who are really driving the youth of today away from the church.

TEN: Apathy – I’m Agnostic. For one simple reason: Who the fuck am I to say that there is no God? Who the fuck am I to say there is a God. We don’t know and we might not ever know. For now I’m trying to enjoy my life on this rock that is flying through space at 108000 km per hour. And while I’m here I’m just trying to be nice, not a judgemental hater.

NINE: Consumerism – It’s true we do live in a world that is filled to the brim with consumerism. But guess what? It’s not attacking Christianity, it’s attacking your wallet. Unfortunately it is human nature to want to develop and drive technology further. Technology is progressing at an alarming rate and that is why we want the new iPhone every year. But that isn’t so scary. What will be scary is when technology becomes sentient and realizes how dumb some people can be. 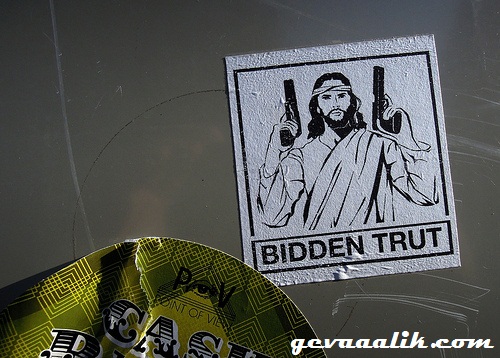 SEVEN: Catholics – I agree wholeheartedly that the Catholic Church should get fucked. There is nothing right about molesting children. But Nancy this is where I first saw that you clearly live in a disillusioned world. Just because a man is married doesn’t mean he isn’t a paedophile. Quick fact Nancy, Nearly two-thirds of convicted child molesters and/or offenders were or had been married. Put that in your pipe and smoke it.

SIX: Muslims – Uhm, no, they aren’t really spoiling anything for us, not even for Christians. But Christians like George W. Bush and Barack Obama sure are spoiling a lot of things for them. Like being able to live in a war free country and being able to take an afternoon walk without getting blown to pieces by unmanned aerial vehicle or attack drone.

FIVE: CosPlay – Yeah because Mr T, Harry Potter and Lady Gaga are running around telling everyone how cool Satan is and how uncool Christianity is. Don’t fucking forget to mention the Easter Bunny and Santa with your list of imaginary evil doers.

FOUR: Sophistry – What you see as sophistry I see as common sense. But excuse me for thinking that it is smarter to question things than just sit back and accept everything “smart” people like you are telling me. I’m also sorry I have a few questions when you tell me that we all are the spawn of the same two people and that the earth is 6000 years old when I can show you a bunch of fossils that will prove otherwise. Then again, you might be right that there is some jester god running around planting fossils because he wants to test my faith.

THREE: Spare the rod – I agree 100% that children should be punished with a smack on the bum. I do not think hitting a child with a cane is cool, because it’s not. But this is not the root cause of the dysfunctional youth. People like you, who are blatantly lying to children, are the root cause of the youth rebelling against your lies when they find out the truth. Silly kids questioning things…

TWO: Internet – It is a wonderful world of colour. The colour get all the brighter when you’ve smoked a joint. But then again I wouldn’t know that if it wasn’t for the abundance of knowledge of the internet. Because guess what – that is another thing I was lied to about. The internet is the saving grace for the world because it is slowly but surely becoming harder for religious zealots and politicians to lie to people.

ONE: Atheists – Atheists can be dicks. Forcing what you believe on other people is never cool. Whether you are atheist and whetehr you are Christian. But the biggest problem I have with your number one threat to Christianity is the fact that you have decided that they are mostly beyond saving. WHO THE FUCK ARE YOU TO MAKE THAT CALL? ARE YOU GOD? I’m pretty sure your God would also object when you start making decisions for him.

In conclusion, if we can all just try and be nice to each other and help each other this world would be a way better place. Cunty behaviour will be the downfall of the human race. And just because you are Christian it doesn’t mean you can’t be cunty. Nancy, your article is very cunty. As soon as you, Nancy (and everyone else reading this), realise that it is fine for people to like different things you will be a happier person.