I’m Andries Bekker, ex-Voortrekker, and I’m trying to escape from PUBG. If anyone reading this can help me get out of this game, I’d FUCKING appreciate it! 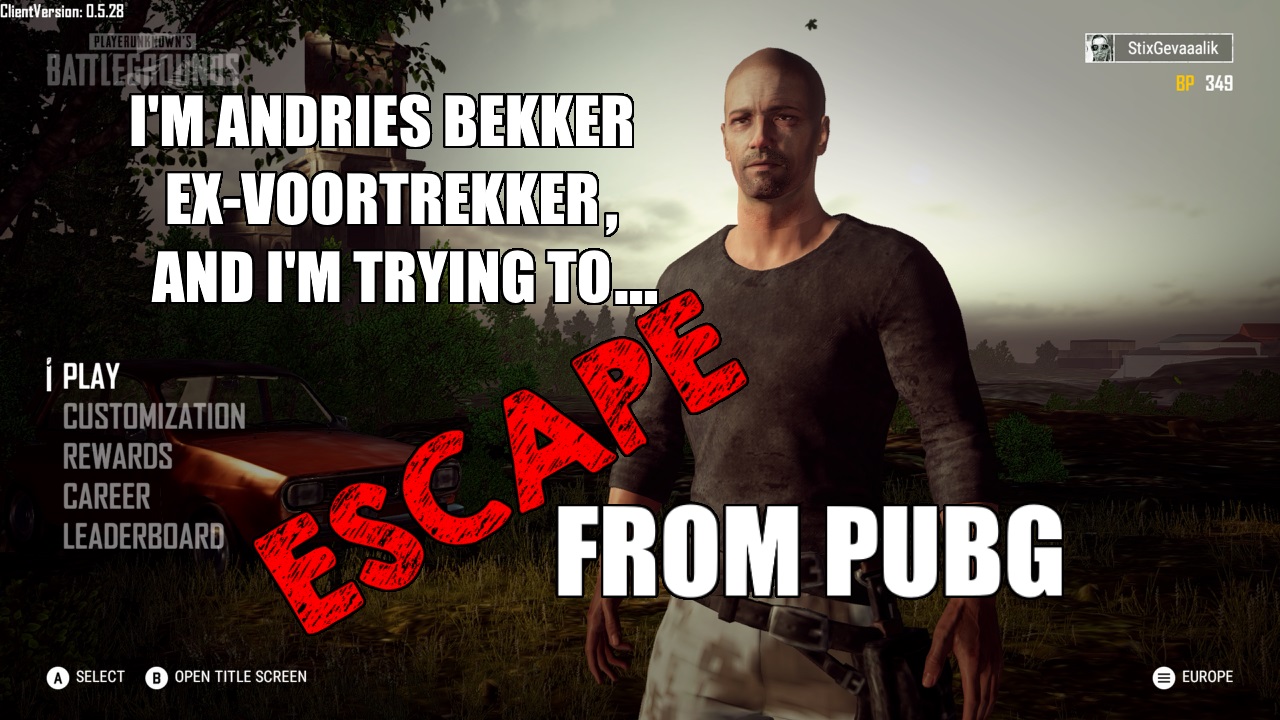 Who is Andries Bekker?

I’m a 33-year-old plaasseun. I grew up on a farm in Sunny South Africa. I was a Voortrekker until the age of 18. With 999 kentekens (Afrikaans for BADGES OF HONOUR), the most kentekens ever awarded to any Voortrekker. Even more than Piet Retief, he only had 998 kentekens. My parent’s farm is huge and we had kakloads of trekkers. My dad used to say: “Die riviere loop oor van die brandewyn.”

Life was good. Then came 16 December 2017, and I woke up in this game. At first, I didn’t know it was a game. I saw a bunch of guys on an island, and there was this floating timers. “MATCH STARTING IN” it said on the timer, with seconds counting down. In the distance I noticed a guy pick up an AKM automatic rifle from a table in the distance. I knew it was an AKM, because boere know their weapons, ou.

Everyone else was just standing around. More and more people started appearing out of nowhere. Mens and womens, some of them in only underwear. The guy with the AKM was now putting, ag loading, a new magazine into the rifle. He was looking right at me. I thought: “Andries Bekker, nou’s jy in die kak!”

Suddenly this guy started lifting his AKM in my direction. Everything started happening in slow motions. I know because the timer that was floating in from of me said 10 seconds till the match starts, but it felt like a hell of a much longer time. Then, I was suddenly staring at the barrel of a AKM automatic rifle pointing right at me and the other peoples standing around me. None of them did anything. 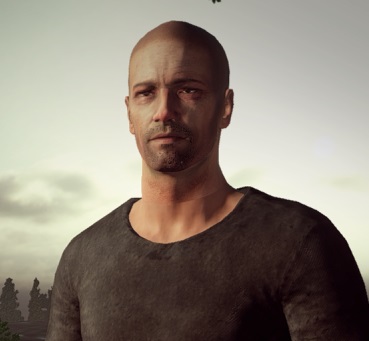 This is what I look like now: A badly aged version of Neo from The Matrix – Andries Bekker ex-Voortrekker

The guy with the AKM, fired the AKM and I kakked myself. I luckily only kakked myself in my head, because where I was standing I didn’t actually kak. That was the first red flag, because in the Voortrekkers we learnt that you always kak yourself before dying. Because I didn’t kak myself, I knew that something was going on. The second big clue was when I actually got shot.

Jis I thought I was dead! But then I wasn’t. There was just this read spray of blood as the bullet hit me right in the chest. I saw the bullet hole in my chest. I knew it was my chest because I got the Biologie (Biology) kenteken (BADGE OF HONOUR) in Voortrekkers. Next thing I knew I was flying in a plane with about 99 other peoples. Then some of them just started to jump out of the airoplane. Lucky the had parachutes on their backs. I knew they had parachutes because I had a Valskermspring (Skydiving) kenteken. Then suddenly I was just kicked out of the airoplane and I was falling towards an island. Again I kakked myself without actually kakking myself.

It took me about three weeks to figure out I was stuck in a game called PlayerUnknown’s Battlegrounds, or PUBG. I don’t know how I got here, I don’t know how to get out of PUBG, but I’m hoping someone who can help me sees this.

“You’re my only hope”

You peoples of the internet are my Obi Wan Kenobies. So please share my story and help me Escape from PUBG.

Why is Andries Bekker on gevaaalik.com?

Because at the moment this doos Stix is the only person I can contact. I know nothing about games or the internet. For some reason, I can communicate with Stix. I do not have Voortrekker kentekens in gaming, the internet or social medias, because I always thought that stuff was for nerds. He said he will help me get my story out to you peoples of the internet if write it on gevaaalik.com and stream on his Mixer account. He’s being a doos and telling everyone that I look like the older person version of Neo in The Matrix.

For now the only way to get hold of me is via email: andriesbekkervoortrekker@gmail.com

You would have thought that doos Stix could at least have chosen a shorter email address.

Like I already told you peoples of the internet, the doos Stix is letting me stream from his Mixer account. He said that streamers are warmkak (hot shit) at the moment and that they are the new YouTubers. I don’t know what that means, but for now it’s the only way for me to get my message out.

I’ll be streaming today from 13:00 CAT when you go to https://mixer.com/StixGevaaalik

I’m being forced to play this stupid game on Xbox One because Stix is too cheap to buy a decent gaming computer.

Please watch my stream and help me escape from PUBG by reaching someone who made it, or by me winning the game. I don’t think that is going to happen because I never played games because games are for nerds!